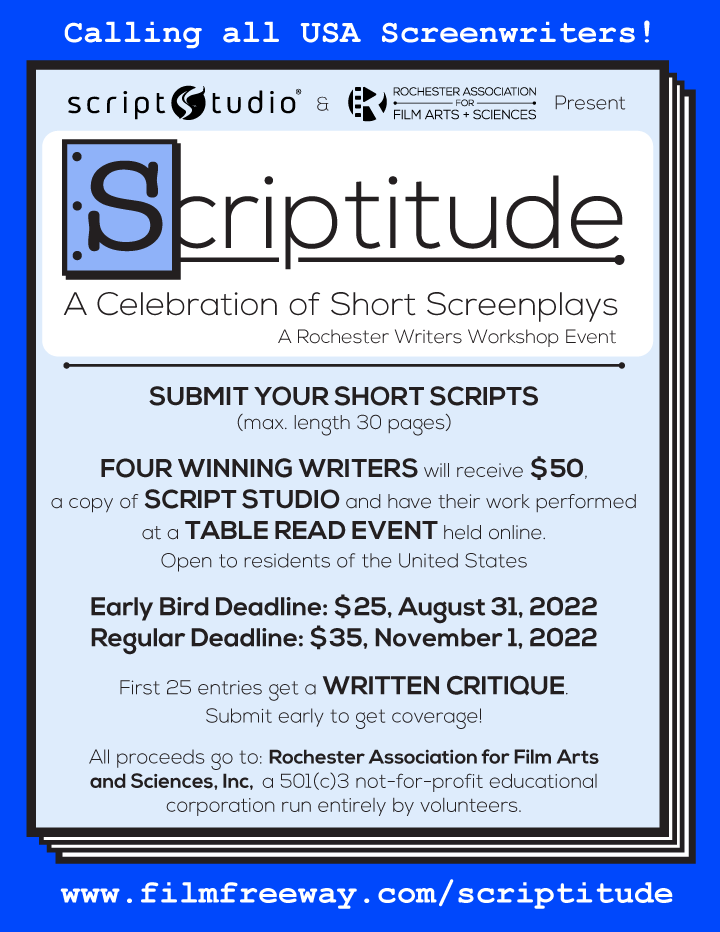 About the Rochester Writers Workshop

Knowledge should be shared! Since 2008, the Writers Workshop has met every other week – as a forum for table reads, discussion, suggestions, constructive critique and education. Mike Boas and Wayne Coughlin run the group and participate with scripts of their own. They also offer offline script analysis on a limited basis.

Rochester Writers Workshop is moving back to Tuesdays! Join us alternate Tuesday evenings at 6:30. See our Facebook Group for the latest meeting details, or check the calendar below.
Same Zoom link every time.
Join the Zoom room here.

Anyone can attend! If you’ve got script pages to share, get some feedback. At RWW meetings, we typically read what people are working on… We suggest prepareing PDFs of 20 pages or less, whether a short, a pitch document, or a feature excerpt. Everyone is welcome, whether beginner or experienced writer! You can also just come to listen and get some tips.

Once you’ve attended a meeting, you’ll get access to the RWW Dropbox for easy sharing of helpful exercises and samples from your fellow writers.

Mike Boas is the owner/operator of Mad Dog Movies, a company dedicated to animation, film editing, and graphic design. His credits include the features Quentin Tarantino: The First Eight, Hero of the Underworld, That Guy Dick Miller, 3.14, and American Grindhouse, as well as numerous shorts and commercial projects.

Wayne Coughlin is the owner/operator of Blue Moon Films. After a successful run as an actor and director in theater, he founded Blue Moon Films in 1997 and began his journey as a screenwriter. In 2008, he directed his first film, Lifeline, and has written and directed many more since then. As an award winning director and screenwriter, he believes that it is his responsibility to share the knowledge he has gained through study and practice.

To contact Mike and Wayne, write to screenwriting AT rwwny DOT org